In January 1915 Colette talked about her visit to the front over Christmas in her column for Le Matin. She described her horror at seeing the soldiers receiving all sorts of presents and luxuries while the children and villagers of the region were left without homes, food and clothes.[1]

Le Petit Journal took a different approach to the soldiers and their holiday gifts. The January cover of their illustrated supplement from 1915 (see above) shows officers sharing gifts with ordinary soldiers on New Year’s Day: friendship among the ranks. It is a scene that is obviously meant to boost moral and offer some holiday spirit and relief. I am not an expert on the First World War – the topic falls outside of the period I usually look at and certainly my expertise – but Colette’s articles led me to some other representations of war in the press around the same period. I decided to take a look at Le Petit Journal‘s illustrated supplement, a newspaper whose covers -like those of Le Petit Parisien – are always a visual treat. Even when reporting on an event that was horrible enough as it was – the war – Le Petit Journal managed to turn it into what they did best: sentimental and brutal melodrama.

The intimate prose of Colette’s newspaper columns tended to focus very much on the devastating impact of war on ordinary people.[2] By comparison Le Petit Journal’s illustrations are less than subtle and revel in sentimentality, glory, heroism, patriotic flag waving, dramatic scenes of (modern) warfare, royalty and lots of evil Germans. For those familiar with Le Petit Journal’s sensationalist depictions of crime , the lack of subtlety in the paper’s representations of war in the year 1915 should hardly come as a surprise. I’ve made a selection of the ones that struck me the most. Let’s take a look. Covers with evil Germans.

Flag waving everywhere. Even wounded soldiers keep holding on to the flag.

Modern air warfare makes its debut in the war and in the illustrated press.

Heroic battle scenes, both on land and at sea. Including singing the Marseillaise while attacking. 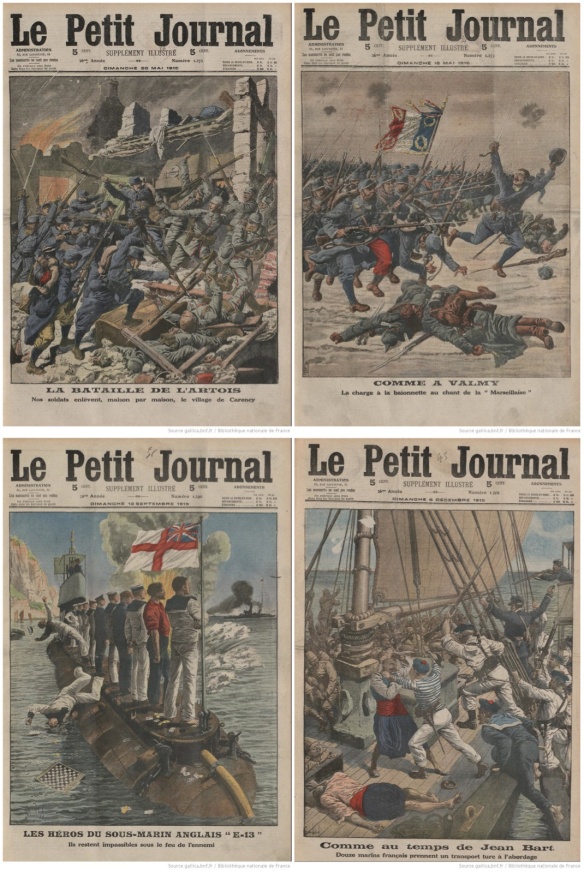 And if that isn’t heroic enough, there is always this soldier who keeps on playing the trumpet even though one of his arms has just been blown off. 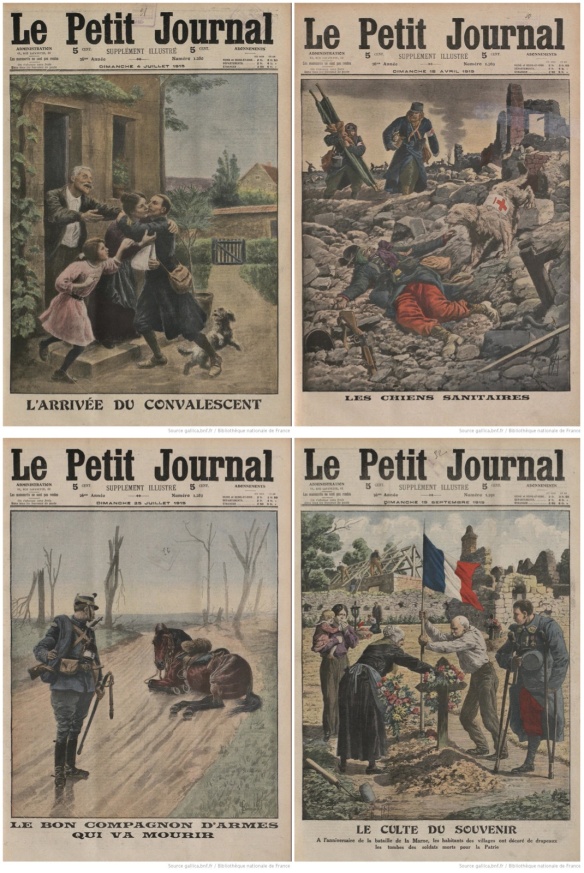 Brave royals doing their bit for the war effort. And for the press. 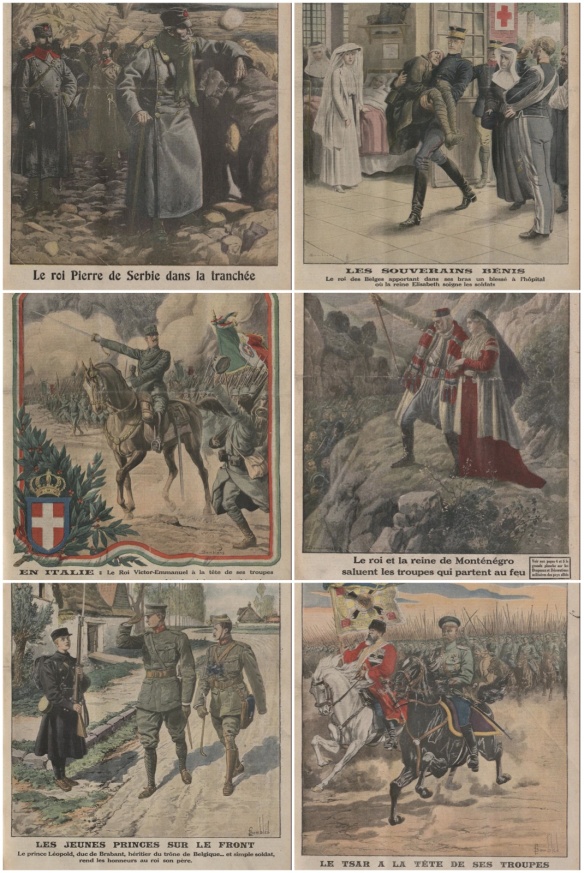 And just look at how bad things are in Germany. They even have to resort to fake news.

I always wonder to what extent contemporary readers believed these dramatised images. How did these covers – if they did at all – influence public opinion? Was the average reader able to look at these a bit critically? Did they bring some comfort? Did people even care when there were so many other things to worry about? The propaganda war was fought on both sides. Covers like these in the popular press were – and had to be – all about rallying support,  a government-backed press machine to keep French citizens supportive of a war that was turning into a disaster. If you wanted to know a little bit about what was going on in everyday life or behind the scenes, it was probably better to read Colette’s articles as well.    Notes

[2] Which I discuss in my article in French Cultural Studies. You can find it here as well as draft version here.